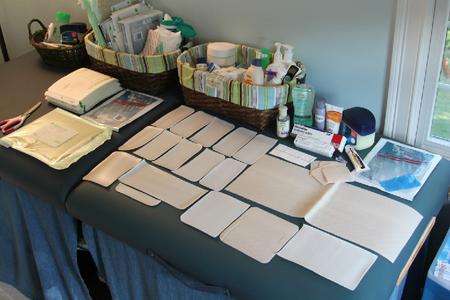 Do YOU have a question about EB?

Please leave a comment on the contact page and I will do my best to answer it!

EB (Epidermolysis Bullosa) is a genetic skin condition that is characterized by blistering with minor rubbing or friction of the skin. In some forms of EB, blistering is also seen inside the body in places like the mouth, eyes, stomach, esophagus, airway, and bladder.

EB is a genetic (or inherited disorder). Depending on the type of EB, the child has to receive either one or two faulty EB ‘genes’ in order to present with the disorder.

Both Steve and I carry a faulty gene.

If protein is missing, why can’t you just give extra protein in the diet to treat EB?

The type of protein that is missing is not something that you can give orally or through the diet. Proteins are not made properly because of the faulty genes that are contributed by the child’s parents, and not because of a lack of protein in the diet.

Currently, there is no cure. Therapies are only supportive in nature. There is research being done regarding stem cell transplants and a possible treatment (not cure) for the disease.  It remains to be seen how much improvement will be seen from these procedures.

Why does Ryan have a tracheostomy?

Ryan lived the first 5 years of his life without a tracheostomy. Unfortunately, his airway blistered so many times, that it nearly closed. At the point that he had to endure emergency surgery, and his airway was about 0.1mm wide. It's amazing he could breathe at all. Ryan has adjusted quite well, and is very "trach" saavy. This tube allows him to breathe, but limits his ability to vocalize effectively...which is frustrating...but he makes the best of it with the use of an iPad for communication.

The level of pain differs for people with EB. It depends on several factors, including what type of EB a person has. Some people with EB require multiple pain medications, and others don’t require any at all.

Normally, Ryan’s level of pain is moderate.  Popping blisters is usually painless for him; however, the resulting wounds can cause discomfort. He does take Tylenol or Ibuprofen as needed to help with this. Corneal abrasions and Gastrointestinal discomfort and bath time are the primary causes of his pain, and we have recently had to start pre-treatment with ketamine prior to bathing.

Ryan also experiences a significant amount of anxiety as he anticipates painful procedures like bath time.

Boy, your son has big cheeks...

Yes he does, but it's not all genetics! Ryan has to take a steroid medication for his airway, and has been on it for a prolonged period of time. This causes a moon-faced appearance, weight gain, increased weights, and flushed skin.  It can also cause sleep disturbance, and mood issues.


How do your son's eyes keep getting injured?

Just like Ryan's skin, his eyes are incredibly sensitive. Unfortunately, corneal abrasions have become a reality in our household.  This is extremely painful for Ryan (and us, too!) Just like any infant or toddler, Ryan rubs his face when he is tired. Sometimes this is enough to cause an abrasion. We have to be extremely careful of the wind, sand, and dust, as these can all lead to spontaneous abrasions (and this has happened multiple times). In addition, dry eyes can also be a culprit.  If Ryan does have an abrasion, it rarely heals itself. We usually have a contact lens bandage placed, and this helps with his comfort level and healing.  We apply lubricant ointment to his eyes before naps, bedtime, and once during the night to help prevent abrasions. In addition, we use a humidifier year-round in Ryan's room.

Ryan gets abrasions about once a month and corneal ulcerations with infection about twice a year.

How long does it take you to change his dressings?

Depending on the day, it can take up to 1.5-2 hours for Ryan's bath and up to 30 minutes for bathroom-related dressing changes. It is best as a two person job, but if there is just one of us, we manage. If we have to change his stomach and back dressings, then it takes longer.

Can a child with junctional EB ‘grow out of it’?

Usually not, although there have been very rare case reports of people who have improved with age.  As a child grows, they may improve in some areas and develop different problem areas.  As they age, they are better able to understand the consequences of rubbing, and scratching. However, with age, comes more activity. More activity causes more blisters and wounds. As time passes we, as parents, are also better equipped to deal with blistering areas and wounds as we figure out what works, and what doesn’t.   Skin can also scar, web, and not heal. Because of this, stubborn wounds can stick around for some time.

Has your son ever been hospitalized for EB?

Yes. Unfortunately, too many times to count. He was in the hospital a close to 4 months of this past year for a series of electrolyte abnormalities, reversible encephalopathy, and intractable nausea. This is exhausting for the entire family and we become the 'experts' every time he is admitted. The blur of parent vs. healthcare provider for your own child is frustrating, and takes a toll physically and mentally.

Why do your son's dressings look soiled?

We change Ryan's dressings multiple times a day, and bathe him once daily, typically in the evening. However, his wounds still have drainage. Sometimes, if he acquires a wound, it will bleed onto the dressing (which is covered by tubifast).  He is by no means dirty or contagious-he just has boo-boos!

No. EB is an inherited disorder, and cannot be ‘caught’.

Where's his jacket, and why is he wearing shorts...it's cold!!!!

Remember that Ryan is wrapped in at least two extra layers of dressings. These don't 'breathe' well, and make him extremely hot (and uncomfortable). If he is dressed in warm clothing, it exacerbates this discomfort.  Don't worry, though, he is covered up for treks outdoors when chilly weather arrives.

Why do you need a handicapped tag?

Unfortunately, Ryan is not mobilizing at all right now. This means that we need to transfer Ryan in and out of the truck and carry him everywhere we need to go.  He's getting heavier and bigger, and it's nearly impossible to transport him without causing a wound. The longer we carry him, the more skin break down he has.

Beyond this,  he cannot be exposed to the 'elements' like normal children can. Windy conditions can cause corneal abrasions, and heat/humidity can cause blistering.  It is also beneficial to have our vehicle nearby in the event of a soiled diaper, as we cannot change him in a conventional changing station or public bathroom.


Why does your son look so short for his age?

The main reason for Ryan's short stature is his use of steroid medication. One of the known side effects is stunted growth.

Also, proper nutrition in people with EB is always difficult to attain. The body needs extra calories to heal wounds. Ryan requires nearly 2000 calories a day to gain weight. While he is on a ‘high calorie’ diet, it is still difficult to find a way to feed him the proper amount. Instead of whole milk, Ryan drank Pediasure as an infant with olive oil and calorie supplements added to his food. Now that he is older, we feed him a normal soft mechanical diet (but no crackers or items with sharp edges).  In addition, Ryan (like many people with EB) has blistering and sores in his mouth. Often times eating is uncomfortable. Blistering and stricturing in the throat can also cause swallowing difficulties in people with EB. Ryan also has had difficulties with his airway.

Your son still has the same wound as the last time I saw him. Why is that?

It is not unusual for people with EB to have recurrent wounds and stubborn wounds that won't heal. Some people have wounds that last a life-time. Part of the reason for this is a lack of proper nutritional status. People with EB often have low iron, zinc and copper levels, amongst other blood dyscrasias. Sometimes supplementation of these elements is not enough to heal bad areas. Ryan's stubborn areas are his face (notably nose, cheeks), his back/torso area, back of the head/scalp, legs, and his diaper area. These are the areas that he rubs the most, or that get the most 'friction'.

Many people with EB have insurance coverage for wound care supplies. The amount of coverage often varies from person to person, though. Many insurance companies have caps on the amount they will reimburse annually.  The dressings for an EB child, on average, cost an estimated $5,000 to upwards of $20,000 dollars a month in many cases.  The DebRA organization provides access to a wound care clearinghouse for those families who need assistance.  But, you can imagine that there is a significant financial impact for families' trying to pay out of pocket for those supplies that are necessary but not covered.

Can children with EB attend school?

One of the most important issues is education-for both the school staff and the students/parents to help everyone understand Ryan's disorder, ask questions, and know his limitations.

Characteristically, kids with EB are smart. Not focused on the 'physical', but rather on the cognitive, these children are often well beyond their peers cognitively. This can sometimes create a challenge when trying to balance all of their needs in a school environment. Also, there is much to contend with trying to balance medical needs with school.

Ryan is in 7th grade with a one on one nurse by his side. She is wonderful, and he LOVES school!

How is EB Treated?

The pads/dressing change table in the background on this page depict ONE NIGHT'S WORTH OF DRESSING MATERIALS.

There is no cure or treatment for EB. Blisters must be lanced (or popped) as soon as they are discovered to prevent them from spreading. We use a diabetic lancing device to do this. Each child is different in terms of preventative care goes, but the one similarity is that most children with EB require preventative dressings and wrapping to protect their skin. Creams and emollients are also used to lubricate the skin. Often times topical antibiotics and steroids must also be utilized. Other ideas to help protect the skin from injury are: Keep cool. Heat and humidity often increase skin fragility and increase blistering. Use soft clothing. Sometimes avoiding seams or turning clothing inside-out can be helpful. Button-up clothing for infants is a must-have. Mittens worn on the hands at bedtime can help prevent wounds from scratching. Soft padding, such as fleece or sheepskin can help prevent wounds and make one more comfortable.

Currently, stem cell research is underway at the University of Minnesota. Most of the children have RDEB (recessive dystrophic EB), although 1 patient with Junctional EB (the form Ryan has) has undergone the procedure, and another is currently waiting to initiate chemotherapy. While this is an incredibly hopeful time for EB patients, it's also a scary one.